The Voyage of Entr’acte

The Voyage of Entr’acte

Part One: The Partnership 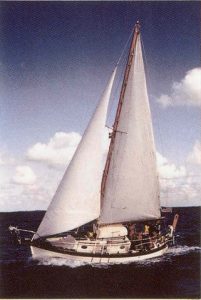 The Partnership is a story of love and friendship, discovery and improbability. Ellen and Ed Zacko met while playing in the orchestra of one of Broadway’s musicals. And hatched a scheme. To take a temporary break from the hectic world of music and explore the world together. The Voyage of Entr’acte was a seven year saga, three years to build the boat of their dreams and four years to sail her 18,000 miles to 13 countries on a budget of $15.00 a day. 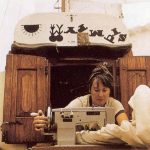 There are no repair shops at sea. Entr’acte carries everything to be self sufficient; including a sewing machine. Repairing the Mainsail in between squalls enroute from the Canaries to Martinique December 1984. Spear fishing in paradise. Cruising is not endless sailing into storm after storm. There are delightful weeks at anchor in crystal clear water with lobster and grouper waiting for you to find them.

Where in the world are we?? 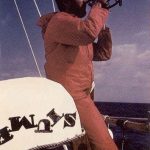 All navigation was done with a sextant using the sun the moon and the stars. In those days we had no electronic aids to navigation. Entr’acte is a Nor’Sea 27 center cockpit sloop with an aft cabin designed by Lyle Hess. She was home-built from a bare hull between 1977 and 1980.

Entr’acte—“Enter the act.”  The music that is performed between the acts of a musical show