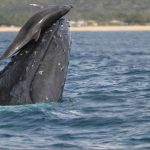 We have thoroughly enjoyed Pago Pago and it was time to move on.
On June 6, 2010 we bid a temporary Farewell to Pete and French Kiss and set sail for Tonga 300 miles to the South.

The first four hours were a slow, sloppy fight but once off the 1000 fathom curve and into deep water everything became sane.  With the wind just forward of the beam we set Entr’acte on a close reach and really took off.  It’s amazing how soft we can get after so little time in harbour. 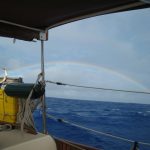 After six hours we both agreed that even though we were disappointed at not going to Western Samoa, we could already tell that by going there we would have given up enough Easting to have turned this trip into a very unpleasant,  difficult beat to windward. Here, we were in a beautiful position.  The prevailing wind was ESE at 15 knots and our Southerly course pointed directly at Tonga.  We were flying along at 6 knots and not taking any water on board.

The 3 1/2 day passage was quite uneventful. Much of it was with the Mainster and genoa.   Dawn of June 10  found us off the entrance to Tonga’s Vava’u Group.  Entering this archipelago  was easy.  The water was deep with no real hazards.  As we approached the Customs dock we kept trying to avoid a small dinghy that insisted on blocking our way.  Was this guy crazy?  No, it was John and Paula from Mr John.  They had arrived from New Zealand a two weeks ago and had been tracking us daily.  We had not seen them for almost two years.  This was wonderful in more ways than one.  They had our new batteries.  We would have sufficient electrical power once again.  A test of friendship is that someone sails 1100 miles to bring you new batteries.
Thanks J/P.

Tonga was nothing like we imagined. We were expecting low sandy  islands like the Bahamas with very large people and a primitive culture.  Not so!  The islands are much higher than the Bahamas but not as high as the Caribbean.    In 1773, Captain James Cook  referred to Tonga as “The Friendly Islands” and not without reason. The Tongans are of are most assuredly not primitive.  They are uncommonly polite and friendly and not at all large.

The Officials all came on board at once and  clearing Customs became a social event that took hours.  First over coffee and cookies we had to explain (with Atlas in hand) where in the US we came from. Then with more coffee, to explain “why do you come to Tonga?” The third round began our lessons in  the Tongan language and where to go while in Tonga.  Eventually we got around to the paper work.  By now, we were old friends.  The Tongans made it obvious that they wanted very much for us to enjoy their country.

Neiafu Harbour is too deep to anchor but there are plenty of safe moorings available.  We ended up right next to Mr John.  Batteries installed.  We’re all set. Thanks again John.

The Kingdom of Tonga consists of  150 islands spread over 140,000 square miles of the South Pacific Ocean.   It is divided into three major island groups.  The Vava’u Group, Ha’Apai Group and the Tongatapu Group.    Cruising Tonga is a breeze! While exploring within one island group the anchorages are so close together you travel under headsail alone.  The mainsail remains covered until you decide to make the fifty mile passage to the next group.

Of the three groups, Tongatapu with its capitol Nuku’Alofa is the most city-like.  Next comes the Vava’u Group with its “big city” Neiafu.  The Ha’apai Group is the least populated and most rural.  They also present the most challenging navigation.

Everywhere there are unmarked reefs, shoals and rocks.  Sailing is done only in daylight with the sun high and astern.  Just like the Bahamas and the Tuamotu, good coral piloting skills are absolutely essential.  Yes, boats are lost here quite regularly.  During our  time in Tonga four yachts were dismasted, two cats were flipped(total losses) and two  lost on reefs.  This is not the environment for the careless.  The beaches are pristine,the water clear.  Wildlife abounds with birds of all species, fish, turtles, dolphin and….WHALES!

Tonga is synonymous with whales.  These islands lie directly in the path of their migration route to the Antarctic.  Each season more than 500 whales meet in Tonga to court, to  mate and to give birth.  We were still early in the season so we had plenty of time to explore Tonga and await their arrival.

Our weekly routine was to provision in Neiafu and then go “out island” for a week or so.  We would party with other yachts, meet the locals for a Tongan Feast, swim, fish and snorkel.  When provisions ran low we returned to Neiafu for a round of shopping and some “night life in the big city!”

June 27  We departed for Ha’api. This passage  had to be an overnight.  The distance was just a tad too far to guarantee a safe landfall in daylight.  The Ha’apai have many hazards so it pays to be prudent.    We departed Vava’u at 17:00 to clear all of the unlit cays before dark. Once in the clear, we immediately settled into our evening routine,  a leisurely dinner, wash and stow the dishes and make ready for the radio schedule.  It was approaching “Gray Line,” that magic 20 minutes of radio just after sunset when radio wave propagation is at its best. I sent the days e mail,received the next day’s  weather maps and made voice contact with the  Pacific Seafarers Net(PACSEA).  Ellen climbed into her bunk and we powered down for a peaceful night.

Ok, Ready for night watch.  Shorts, T shirt, safety harness, coffee, cookies, MP3 player clipped on. What music for tonight?  Nothing rambunctious–something nice and peaceful to fit the mood. All is well.

Before I leave the cabin, I clip the safety harness to the Starboard tether, with my night snack in hand I enter the cockpit and just as I sit down there is an explosion next to my  left elbow.  Brrrrrraaaaaaaathhhhhh!  A large humpback whale had surfaced and blown right next to the cockpit just 6 feet away.  The cockpit and me are showered  in whale bharf!  It scared the bejezzus out of me.  The cookies were a soggy mess as was the coffee cup. The smell was………Yuk!     The first hour of my peaceful watch was spent changing clothes and cleaning both myself and  the cockpit.  Those whales are hard enough to spot by day but at night it is impossible to see them. That was far too close.

Mr John managed to hit one on their passage up from New Zealand.  Fortunately there was no real damage to either the whale or the boat.

We enjoyed two weeks  of solitude in the Ha’apai.  Just like the Bahamas, they are low and sandy with many secluded, pristine beaches and super clear water.  They are not overrun with tourists and provide the perfect getaway from “busy Neiafu.” The reef pilotage was a challenge.  We were glad to have all of that Bahama training. Two weeks was not nearly long enough but just after the passage of a front we had a wind shift which would  again give us a nice reach  back to Vava’u. Then another stronger front was due to move in with another wind shift that would make the Ha’apai anchorages  unsafe and very uncomfortable.  Everywhere in the Pacific paying close attention to fronts, wind shifts and anchorages was the key to safety.  Tack tics were king!

Back in Neiafu we had a great time.  It was a delightful little town that had everything one needed.  Banks, food shops, fresh fruits and vegetables, coffee shops and restaurants.  After the incredible high prices of French Polynesia, Tonga’s prices were a treat.  We could afford to go out once more.

For night life in Nieafu there were numerous restaurants with all sorts of menus and entertainments..  Our favorite was The Giggling Whale which was ably run by Cathy and Sandy Best.  On our first night there, John and Sandy looked at each other quite strangely.  “Are you Sandy Best?”  “Yeah Mate.  You’re John Wolstenholme aren’t you?”   When they were 15 years old, John and Sandy had been class mates, Cadets at the Maritime Academy.  Small world this. With this the stories began.

Entertainment at the Giggling Whale featured the Hausia Brothers, a Tongan Family Band that played every Wednesday and Saturday night.  They loved to meet foreign musicians and welcomed Ellen and I warmly.  We became regulars at “The Whale” and of course we joined the band at every opportunity.  Their  repertoire covered everything from Fefe Hakke, Imma Si Lau to Commin’ Round the Mountain.  They fell in love with the violin. They said  it made their favorite tunes Home on the Range and Beer Barrel Polka come alive.  My personal favorite was their arrangement of Blue Skies.  They really made that one their own.

We decided to record the band–”The Hausia Brothers–Live, at the Giggling Whale”  Three live session and one in their home.   Unfortunately it will only be released in Tonga.

The weeks went by and every day on the radio there would be a call—”Whale Sighted!” as more and more whales converged on Tonga for their mating season.  It was not unusual to find a whale inside the anchorage swimming around the boats.  Sailing between anchorages we had to keep a really good lookout. Tonga was getting crowded but it made for some fantastic photo opportunities.

The climax to our season n Tonga was swimming with the whales.  This was really “over the top!”  Tonga is one of the few places in the world that you can actually be in the water and have these whales approach you. Yes, you could probably do this from your own boat but we discovered early on that the best and safest way to go about this, for us and the whales, was to go out with the Dive Pros.  We went out twice and if time had permitted, would have gone again and again!

To float in water a mile deep and have a 40 ton mammal rise out of the depth and swim directly toward YOU is ……inspiring?, Incredible?, Awesome?  No  words do it justice.  It is something between a dream and a prayer.    They are so beautiful and gentle.  To hear them sing makes make you cry!  It was like making a space walk, a lot of preparation and then it’s suddenly over, all too soon.

John and Paula took off for Fiji with the next weather window.  We will follow in two to three weeks after we complete our recording project with the Hausia Brothers.