The Voyage of Entr’acte Part II – The Friendship 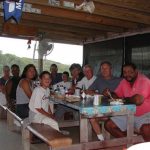 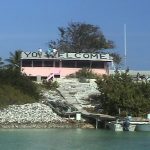 The original plan in 1986 was to return home, work for a while, regroup our finances and return to the sea at some point in the future where we would all meet again. As Always one year turned into two and two turning into ten and suddenly “where did the years go”? We were still working toward that plan sometime in the indefinite future. Both Entr’acte and our careers in music underwent a fourteen year refit. In the summers we trailed Entr’acte to Florida and spent the time in the Bahamas which we had grown to love. Many changes and improvements were made to the boat.

Throughout this time we maintained a very close friendship with Fred. We were remaking our careers while Fred, after selling OTTO bought a twenty-seven foot sloop to sail Lake Ontario and worked on “making crew”! We always talked and planned of a time when his children were older, we would meet again in the islands and have another go at the sailing life we had grown to love.

Fred had originally planned to go several years hence and in a much larger boat. Now, his clock was ticking and he was out of time. “Monica says that if we want to go sailing we should do it now in the boat we have. What do you think?

Fred’s only reservation concerned the eduction of his two sons, Josh, 12 and Justin 9. They would be out of school for one year. Ellen and I offered to oversee their schooling for the duration of the voyage! And so, Ed packed his drums away, Ellen packed up her violin. We resigned from our teaching positions and after a nuclear spring of preparation, departed for points south. 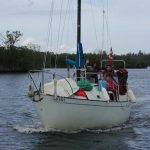 Nadine on the Intracoastal Waterway.

The plan was rendezvous with the good ship Nadine on the Chesapeak bay and head south for a winter in the Bahamas. 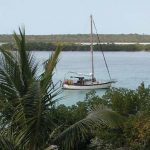