Well – here we are in the middle of our first Northeaster. a real storm. It didn’t take long. We knew it was coming so we wanted to get some place to hide out from the big wind and then it happened. Everything was fine, we were safe until Caicos Freiddie ran aground going into the sheltered anchorage.

There he was on a lee shore with the sun setting in the west and the wind rising rapidly. What to do… We were in the channel with twelve feet below us and we couldn’t go near him as he was starting to heel over. The best solution was for Ed to go on NADINE to try to get them off and I went and had a shower, prepare for supper and say my prayers that soon my husband would return and everyone would be happy in this beautiful little cove. Luckily a crabber – in fact the crab boat in our first video driven by the son of the man in our video – went out to help the boat in need – Although the sails were all up and sheeted tight, the boat wouldn’t heal enough to get off. They took a line from the top of the mast to the crab boat. He took off at right angles to the grounded sloop and voila – the boat took off like a shot. Moments later Freddie called me on the radio. He was nicely anchored next to us and his words were “The Eagle has landed”

Oh, the cruising life. We have been working so hard since we left many times I yearn for the calm life back there in NY. We have been in the water for two and a half weeks now. It seems like a year – during that time we ran aground twice!!!!! There’s a saying, ” A man who hasn’t run aground hasn’t gone anywhere “- we run around a lot.

The Bay is a forgiving place, filled with soft mud and we managed to get off both times with not too much difficulty. The trip to the Chesapeake Bay by car was easy. We were sad to leave Our house but have left it in good hands. A nice couple soon to have a baby is renting it. We left one month late because of all the little house jobs that needed to be done to make the place right for the renters. Sunday September 29th we were on our way. We went to Cambridge MD on The Eastern shore and set to making our boat into a floating craft. It took about three days and we were floating.

We soon met up with sailing friends who have been waiting for two months for our arrival – John and Paula from “MR. JOHN VI”. We had some adventures with them especially catching crabs in St. Michaels, MD. The best way to catch a crab on the Bay is to go to the store and buy a chicken and cook it. (That way if you don’t catch a crab you will still have dinner) – next you take monofilament and tie it around pieces of the chicken’s neck and back. Hang about four to six lines around the boat and wait. The lines need to be weighted to keep them on the bottom. You must have a chicken-wire basket on a pole ready. After a twenty-minute wait you start around the boat, slowly lifting up the lines. If you feel a crab tugging on the line you have the net ready to scoop the crab up before he breaks the surface. The crab will let go of the chicken the minute he sees you. You throw the crab in a bucket – when you have caught about twelve you have enough for a meal. Now for the scary part – cooking the crabs. They will want to jump out of the pot. You put them into a steamer and start the flame going. It is unfortunate but you are boiling them alive. They crawl around the pot – if you can get over this – in ten to fifteen minutes – depending on the number of crabs – dinner is served. 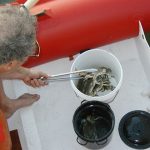 The next difficult thing, is trying to figure out how to eat them. This is a lesson in biology – getting around a crab and coming up with meat. I still have trouble doing it but professional pickers can pick a crab in thirty seconds separating the meat into back fin, claw and other.

After a short stay on the Eastern Shore we went to Annapolis MD for the Boat Show. We finally met up with Fred and family. NADINE was anchored next to us. We surprised them when they arrived by having Dominos pizza deliver two large pies to the dinghy dock. We had to explain where the dock was – I don’t think many people make deliveries there. It seemed natural to me. While in Annapolis we can’t catch crabs because it is a city and with cities come pollution. We will catch some next week when we go back to the Eastern shore. Monica wants to cook them Chinese style – rip the backs off while they are alive and fry them in oil. This is sounding more and more morbid by the day. I think I might get interested in tuna fish pretty soon.

Justin and Josh rowed over to our boat at 8:00 A.M. this morning to get the chicken and basket to catch some crabs. We had a school delay yesterday because of the storm. Actually school was cancelled because the bus (dinghy) couldn’t make it through the chop. Today they are so excited to try and catch their first crabs. Of course we hope to capture it on video. Maybe tonight Monica can boil them in oil – Chinese Style.

We miss everyone. It is so cold here. We hope it warms up. The plan Is to go to Florida around November 15th but if the weather stays this cold – I am leaving tomorrow. That’s all for now – love to everyone from Ed and Ellen in Le Compte Creek, on the Chesapeake Bay.