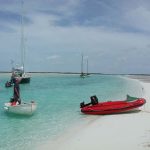 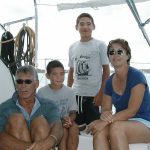 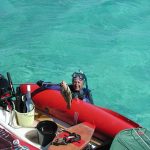 One of the joys of the Bahamas is to “Go down and Get ’em!”

Georgetown Exuma is the Mecca of East Coast cruising sailors. There were 400 boats in the harbor when we arrived in the middle of a tremendous thunderstorm. We would not normally go to such a crowded place but it was for us the “return to the scene of many crimes” and we also heard on the HAM radio net that our old diving, spear fishing guru–Norm Guindon was back in G Town from Venezuela and was getting married. We had lost track of him over the years but he had become such a legend with Fred’s kids that we just had to go fishing with “Bahama Norm”—“He Good!!! He Go Deep!!!” 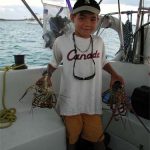 For months all we heard from Justin was “All I want for my birthday is for Bahama Norm to come up to the boat and hand me a big lobster and say “Happy Birthday Justin””. Well he was not disappointed. It was a big one. Of course Norm couldn’t get just one – he got one for Josh too. I wonder If Fred and Monica got any of their supper that night. We all went out diving with Norm and the event is far too complicated and bizarre to go into here. Suffice it to say that Norm was Norm, Ed was Ed, the fish was big and deep (yeah right!) and Fred outdid himself for getting into trouble. Thanks to Norm, Ed is now diving to 50 ft again. Hope this email finds you well and happy – more to come from Nassau. 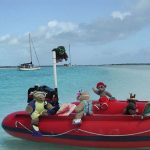 Pipe Creek Exuma.“Caicos Freddie, Mr. John, Enr’acte, Nadine. It does not get any better than this.

Deborah Ray, the famous Culpeper address, came for a visit in Georgetown with the intent of a leisurely two-week trip up the Exuma chain – wind behind – back to Nassau. This was foiled by the weather. We had to spend nine days in Georgetown while the weather that you all had up north, the late season snow/slush storm came to us in the form of strong northerly winds. We even had to hole up in Pipe Creek on our way back to Nassau and today finds us pushing, fifty-five miles across the Yellow Banks to get Deborah to Nassau for at least one day of sight-seeing and shopping. It is calm today and we are making good time but this wasn’t our planned exit from the Exumas, our favorite cruising grounds. But, she did get it all! Big wind, fast exciting sailing, waves breaking over her while sitting in the cockpit, a broach under spinnaker and a mysterious taking on of water that we must track down as soon as we get to Nassau. We are not exactly sinking but it is a bit unsettling to be dashing about the ocean with the pump going off every 7 minutes. She got her share of fresh fish but unfortunately the lobster season closed the day before she arrived. Oh well, you can’t have everything. 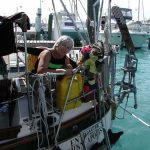 As we write this, we are under way crossing the Yellow Bank for Nassau. We said “good-bye” to the lovely Exuma Cays and are heading back to Fla. for a, hopefully, very quick preparation for the trip to Europe. We are sorry that we were recently a little out of reach but the Exumas are very remote (at least where we were). The email system leaves something to be desired. While in Florida we plan to install high frequency radio email on board which will enable us to send and receive from anywhere in the world at any time. We’ll see if we can put this together in the time we have.

Love from Ellen and Ed