Home   »  July Trans-Atlantic to the Azores

July Trans-Atlantic to the Azores 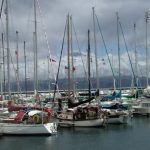 Greetings from the Port of Horta on the Island of Faial in the Portugese Archepeligo of the Azores.
After saying goodbye to the crew of Nadine we sadly departed the Bahamas and returned to Florida to make final preparations for our trip across the Atlantic. There was so much to buy, to organize and to do. Our main objective was to install a radio modem aboard Entr’acte. We were extremely fortunate to meet fellow cruiser Paul Eden in the Bahamas and he offered to help us set things up when we returned to Florida. The complication in all of this is that we run the Macintosh platform and the Winlink software is exclusively a windows environment. We should clarify here that we had not really “met” Paul but only spoke to him on the radio. We knew nothing about him. “Are you sure you can make this work”, we asked? “Oh yes I can make it go! Just have the modem and software sent to me in Melbourne, go to the marina there and call me when you arrive. We’ll have you up and running in just a few hours.” Well, we took him at his word and true to the cruising lifestyle had everything sent to Paul; including credit cards, Auto pilot repair, real estate papers, and all of our mail. Thousands of dollars worth of equipment! Ah how the cruising life enables you to re-kindle trust in your fellow man 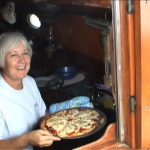 The trip back across the Gulf Stream was quite pleasant and uneventful until we tried to run the Ft. Pierce Inlet at 02:00. We had a NE wind opposing a fierce outgoing tide. The inlet was extremely rough and we were a bit too tired to make any real life or death decisions in the dark so we went back out to sea and waited for sunrise.

After a quick haul out to inspect the bottom we were off to the Melbourne Marina. We were relaxing that first night when a big Harley Cycle pulled up to the boat and announced “Hi, I’m Paul! Christmas will be tomorrow morning and all of your presents are at the house in my lab!” The best way to describe Paul is to direct you to that movie “Space Cowboys.” Back in the 60’s Paul’s job was, and sort of still is, to design and build a radio system to control orbiting satellites. His story is just like in the movie without all the unhappiness and intrigue. Paul’s version played more like a comedy. He is definitely a free spirit! Paul was more than up to the job of getting us “on the air.” It took more than the predicted “few hours” because we were constantly interrupted by phone calls from NASA regarding a Satellite that would not behave properly. We had such a good time with Paul and Jane that we decided to stay in Melbourne to do the final provisioning for the passage. Their 1966 Olds convertible (all original) might have pushed us a bit in that direction.

Finally, a week later, the email working and the stores on board we departed Ft. Pierce, Florida bound for Bermuda. 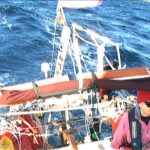 We had some company on board for this trip – Herb Hilgenberg from Southbound II. Herb is a legend among ocean sailors. He runs a daily weather net at 20:00 hrs. Herb takes weather reports from the individual yachts, keeps position reports and gives weather prognosis advice to each individual boat relative to it’s position. It’s like having your own personal weather routing service. This was the best decision we made. Herb is on the air every single day and rarely misses a day and NEVER without prior notice. He has been doing this for the past 20 years. Herb takes the concept of commitment to a new level. 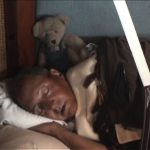 The passage to Bermuda took us 9 days. We could have made it in 7 but we gave up two days to dodging fierce gales. Herb predicted the gales and their movement so we just slowed down and let them pass to the North of us. It blew hard but always from the SW, behind us, and it never blew above 30 knots which was a real blessing. Had we carried on blindly at speed we would have gone right into the really big winds of 40/60 knots and they would have been in front of us; the worst conditions possible! So, we had a fine if boisterous trip to Bermuda and saw an abundance of sea life; dolphins, whales, turtles and very few ships.

Bermuda was as great as ever. We were fortunate to have a spot right in the center of St. George at the town dock. We were in the center of the action right next to the dunking stool. A few times each week in 18th century fashion they staged a town dunking. In colonial days if a woman was convicted of gossiping, nagging, or any other of a variety of offenses they were publicly placed into the dunking stool and dropped into the water of the harbor. Everyone is dressed in authentic costume and plays out their rolls of the time. We had a ringside seat for every dunking while we were there.

A dear friend from twenty years ago, Joe Kelly, still lives on Bermuda and he showed us the time of our lives. Joe is very tuned into the cruising lifestyle and our first night in Bermuda he took us out to dinner at a fantastic restaurant hidden somewhere in Hamilton. It couldn’t have been better. After nine days of canned food, we dined on Bermuda’s finest; great wine, a great meal and dessert while renewing our friendship. Joe runs the deep sea fishing boat “MESSAROUND” out of St George. He took us back to sea on several fishing excursions. The only thing better than landing a 55 lb Wahoo is eating one! For those of you who are interested in deep-sea fishing check out Joe’s web site www.fishandfun.bm. This was all followed by picnics in the park, visits to the grocery stores, hardware stores, marine supply stores, a night in his Bermuda home, and just enjoying the island lifestyle.

Our position in the town center allowed many yachts to come by and say hello. It was always a surprise to meet someone for the first time. “Hi Entr’acte! We’re Iwanda!” “Oh wow! Have you guys dried out yet”? “That was some start you had!” Herb’s weather net fostered a rather strange relationship between the yachts on passage. We knew each other only by yacht name, radio voice and the conditions we each encountered. Each day we would come up on frequency and listen to the reports. We’d laugh with some (“pizza all over the floor), cringe at others (“Herb, you gave me bad info!) and pray for a few (“you missed your chance to go South. All you can do now is hang on)”.

A fellow Nor’Sea owner and Bermuda resident, Peter Beckett, stopped by and invited us to his house; an authentic 19th century whale house complete with back yard try works. He offered us the use of his dock to make the final preparations for the next passage. We dined with his wife, Diana, dog, Bella and sister, Pauline, had a wonderful dinner and departed the next day.

June 12th dawned with a favorable weather forecast from Herb. He encouraged us to stay around 33-34 degrees Latitude to avoid the “big” weather coming off the US east coast. Spring just did not want to come to the US East Coast this year. One low pressure cell after another marched across the US and out to sea. We felt like we were being chased by demons but with the weather intelligence we had we knew exactly where the fronts were going and could sail to avoid them. Only once did we have to tack and run South for a hundred miles to keep a Low pressure center to the north of us. It was mighty inconvenient as we then had to come all the way back to where we started but we kept the 15/25 knot SW wind behind us all the way to the Azores. The boats that went north or carried on East had horrific winds and head seas. For us on the Southern track it was an idyllic trip. We were able to send email regularly, and make radio contact with Paul in Florida almost all the way across. We led a somewhat normal life.

While in Annapolis, we constructed a cockpit enclosure and this proved to be God-send as it sheltered us from the cool night winds and rain showers.

This passage took 19 days and was also filled with sea life, including whales, dolphin, turtles and countless sea birds. Our evening entertainment was provided by the local “Dolphin Family Swimming Academy.” Mamma brought the kids out to learn to swim by racing against “Entr’acte”. It was the most comical thing to watch these little guys trying to become dolphins and not succeeding! We don’t often think about such things but these sea creatures also have to learn how to swim, jump and do all of that “flipper stuff.” 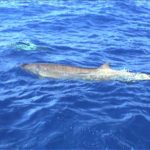 We arrived at Isla das Flores, the Northern most islands in the Azores at 7:00 P.M. in a thick fog on July 3rd after nineteen days at sea. The island is so high that you would normally sight land at 30 miles but this time we saw nothing until we were one mile from the harbor entrance. We knew it was there as we had all of the signs and GPS is pretty reliable but Captain Ed being the navigator nerd that he is dug out the radio Direction finder just to make sure.

Our arrival was somewhat anti-climactic. No sirens, no bells, no whistles, no fireworks. Just an immense waterfall cascading down the mountain into the anchorage 50 yards away. Unlike landfall in Horta where there are numerous sailing yachts and a constant party atmosphere, Flores was very quiet. There were only two other boats in the harbor. Customs was closed for the day so after 19 Days at sea we remained aboard, had a hot shower, made a pizza and relaxed in the cockpit listening to the birds and the waterfall.

We were now ready for our reward, that beautiful sleep that only comes on your first night after a long passage.